This article will guide you through internationalization (i18n) and localization process. Discover 4 good reasons to do it now and learn how to do it right.

Why should I care now?

Let's imagine we are the finest Belgium chocolate maker. We have this new mobile app we are working on. This app allows our customer to order chocolate. We are not sure this will be worth the investment yet and first we want to launch a MVP (Minimum viable product) in one country. But, the vision is to launch it in every country where customers can buy our chocolates.

So why should I spend time on world readiness when I'm working on a MVP or a v1.0?

Ever heard about this annoying spelling mistake, which has never been corrected because the developers always say they have more important things to do?

But let me tell you a secret: this is NOT their job!

The antidote to all this pain and suffering is to have this text easily editable by a non-developer. Translators, copy writers and growth hackers will thank you.

While i18n might be a lot easier when done from the beginning, this might become much harder when the code base starts to grow.

Another horror I have seen a lot is string concatenation. Developers are human, and sometime they are just lazy. Who hasn't faced such terrible kind of code:

This will need a complete rewrite when you'll have to handle a new language. So don't do that! Never ever!

#3 We live in a global world

Unless you have a specific project, it is likely that users from different cultures will use it. So let them use the language and culture they are comfortable with.

Besides, this will probably run on computers with different regional configurations. I mean, some french people install their computers with English as locale. This is quite common among developers, but it might occur in some global companies as well. What will happen when your French only application will face such a configuration? It may crash due to some number formatting issue.

Once, I worked with team which implemented i18n in a hurry as part of a v2. Guess what? They had it completely wrong. I do believe that they made several mistakes :

As a consequence, developers were spending hours to update wording from spreadsheets. This was error-prone and it generated a lot of frustration. But don't worry, thanks to this article, you will avoid all those traps.

An internationalized and localizable software is likely to have better quality. Don't get me wrong, I'm not talking about localized but localizable).

Such a code base will have more consistent behavior against different configurations. Maybe it should be part of any quality development, just as linting is.

In computing, internationalization and localization are means of adapting computer software to different languages, regional differences and technical requirements of a target market. (Wikipedia)

Localization a.k.a. i10n is about adapting your software to a specific region/language. If you took good care of internationalization, localization will mostly rely on resources translation. This should be quite straightforward. But sometimes, you have to write specific business rules or layouts for advanced scenarios.

How to do it right?

We need to build an infrastructure which allows us to retrieve appropriate resources and format data for a given culture. Let's go through some steps.

Remember? We are a Belgium chocolate maker. So we will support Dutch! But French too. And we definitely want to export our amazing products to France (they speak French! easy!). Oh, but we have a lot of customers in Canada, UK and Wisconsin too! So we will definitely need English. The final list:

OK, but right now we only have Dutch, English (us) and french (fr) translations. But because UK English and American English are not exactly the same, this is where you will need to introduce neutral cultures. This allows you to set default resources for a given language while still supporting regional data formatting and resource overriding.

This schema shows a culture fallback schema which could work but some platforms have more elaborated ones. For instance, In .net you the fallback sequence for fr-CA would be fr-CA, fr, fr-*, default language definied in the assembly

You might have noticed we are using language tags as defined in RFC 5646. This is the most common and standard way of naming languages.

It even supports scripts, variants, etc... This is handy when supporting more complex languages or when tagging content for automated processing. You are unlikely to handle both zh-Hans-CN (simplified Chineese) and zh-Hant-CN (traditional Chineese) the same way.

The default culture will be used when:

Text resources are usually the biggest part of localization. The most common and simple way to address text resources is to use a key value pair approach. The key is a constant across languages and used to retrieve a specific text resource.

Many platforms have a built-in support for such kind of localized text resources. Despite they have quite the same schema (key, value, description), they have different format. Some translation companies use a standard called XLIFF. It is xml based and you can easily convert from XLIFF to any other format. So I would say it is the way to go for text resource management. There are several tools for XLIFF file management such as Java Open Language Tools, Transolution or Microsoft multilingual app toolkit. Under some circumstances you might prefer .po files but this is a little tight to linux/unix ecosystem. 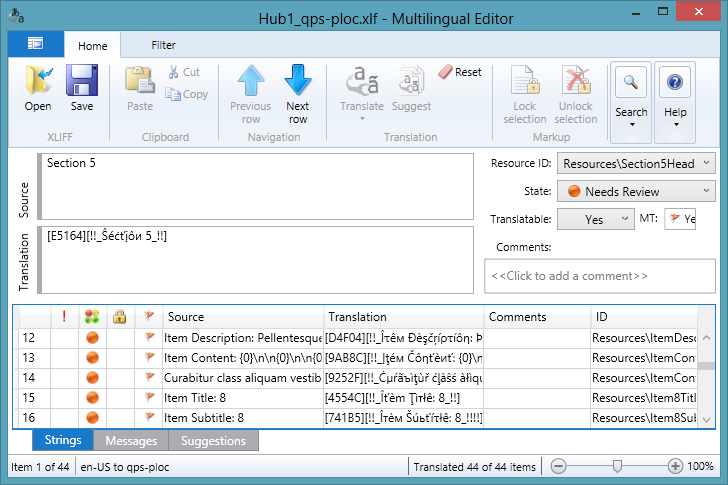 This might seem simple, but don't fool yourself, there is a lot of traps. Let's review some rules to avoid them.

One simple example are on and off usage. In English it is completely fine to use these for "Flash" and "Cloud file synchronisation" settings. But it french you would rather use "Allumé/Eteint" and "Activée/Désactivée".

Now that you're aware of common pitfalls, let's talk about "format strings" (sprintf, string.Format, etc...). For instance, we've all used them to print numeric data, such as "x items in cart" or "only x items left". Taking previous points into consideration, I would advise against using features such as sprintf for those resources. Rather use some extensible templating engine such as handlebars. There are several advantages to doing so:

When defining your resources, as shown in previous capture, you should write a comment which describes in which context they are used. It may also contain everything that might help translators/copy writer do their jobs.

One last thing, I like my resource keys to have a prefix which indicates in which view they are used. This automatically sorts resources per view. That makes them much easier to find. For example, I would use homepage_intro_title to refer to the title in the intro part of the homepage.

There are two working approaches for image localization:

Platforms usually provide a set of APIs for that matter. Yet, this is not always the case and you might need some extra library. I would recommend using some well known open source libraries rather than building your own. For example, in web development there are "formatjs" or "momentjs".

This is a tough one. Yet again, platforms might have built-in support for most of languages.

Sorting? What the hell are you talking about? B comes after A, C after B etc... Simple! But all languages do not work like Latin characters based ones. The best example is Japanese. Kanji sorting is phonetic. Easy you would say, we just need an algorithm that converts string to a phonetic notation and performs sorting based on that. Nice try! Except, that wouldn't work. Japanese has another surprise for you! Kanji pronunciation depends on context.

I won't lie to you, adding the fact that Japanese has not only kanji, but 3 other character sets makes Japanese localization a complete nightmare. Meanwhile, each language has its specificities so just be aware and dont believe that ordinal ordering will do the job :).

Usually you won't need layout variants unless you have to support right to left languages. That said, development patterns such as MVC or MVVM usually make loading of specific views pretty easy.

Note that some platforms have advanced left to right and BiDi support. You might be tempted to build one single view that supports all scenarios but this is not an easy thing. I wouldn't recommend that.

If you do internationalization right and implement it from the start, you will save your team a lot of time and a lot of furstration. It will also improve your code base and product quality. And it will, at least from the product point of view, make you global ready. So you should definitely consider internationalization as an investment.

Localization is sometimes a little more complex. But remember, being l10n ready does not mean actually supporting every languages yet. I often learn new things when working on that subject. I will probably update this in the future. Meanwhile, please leave us a comment if you want to submit a specific case or an error. In the meantime, please fell free to comment to share your personal experience or ask questions.

We'll write technical guidance for different platforms such as Windows Apps, Angular or NodeJS. Subscribe to our newsletter and get notified when it's available! May code be with you !

By following the steps of this article, you will have a powerful automation tool that can lint and compile your TypeScript files and restart your node server each time you make a change

This tutorial will help you get started with Grunt, a useful Javascript task runner with automation capabilities. We’re hearing a lot about GruntJS these days and you may wondering why. I’ve